Let’s get straight to the point; the antihistamine Piriton has been used by vets and dog owners alike for the last fifty-odd years to treat a wide range of conditions, such as bee stings, insect bites, allergies, and hayfever. However, just because it’s been used for many decades (and is still used to this day), Piriton is still a pharmaceutical medication and can, therefore, cause side effects.

Although generally considered a very safe medication, Piriton can cause adverse effects in dogs – even in those who have previously taken the medication without any issues. This risk increases if the wrong dosage is used, if the dog is on any other form(s) of medication, if the dog has other health conditions, or if the dog is older and in less rude health than they previously were in their younger years. For these reasons, Piriton should never be given to a dog without the express permission, i.e. a prescription, from a vet.

In today’s article, we’re going to take an in-depth look at Piriton, namely what it is and what side effects it can cause. 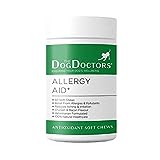 Piriton is a brand of allergy tablets that is commonly used to treat the symptoms of hayfever and other common allergies (food allergies, hives, and insect bites, for example), such as redness, swelling, itchiness, a runny nose, and stuffiness. The active ingredient in Piriton is the antihistamine chlorpheniramine maleate.

What is Piriton used to treat?

What are the potential side effects if I give my dog Piriton?

Although it’s impossible to say whether or not your dog will suffer side effects from Piriton, it’s important to know what potential side effects may occur, as if you’re aware of what to look out for, you can deal with it promptly.

Drowsiness: If you’ve ever taken Piriton yourself, you’ll be aware of how drowsy it can make you feel – and it affects canines in exactly the same manner. That being said, drowsiness isn’t guaranteed to happen and largely does because too high a dose has been used, but it’s important to be aware that your dog may feel a little sleep after taking this antihistamine.

Diarrhoea: When introducing something new to your dog’s digestive system – be it medication or food – there’s always a chance of an upset stomach and possible diarrhoea. If it happens after the first few doses, it may be a sign that your dog doesn’t tolerate Piriton very well, and you should consider using a different type of antihistamine. Conversely, Piriton may also cause constipation.

Dry mouth: This potential side effect is a little tougher to spot as our four-legged friends are notorious for not drinking enough and seeming to have dry mouths at all times! However, it’s essential to keep a close eye on their mouth to see if it’s dryer than normal and ensure that your canine buddy has plenty of clean, fresh drinking water available. Dry mouth is probably the least concerning of all the potential side effects of Piriton, but it must be addressed promptly nonetheless.

Vomiting: Dog’s will usually vomit pretty soon after consuming something that doesn’t agree with them; therefore, if Piriton isn’t right for your dog, you may know almost immediately after giving it to them. However, sometimes dogs may sick something up even if it doesn’t cause any internal issues, so trying it a second time should give you more of an idea as to how well your dog reacts to Piriton. Ultimately, vomiting is never a good sign, so if your dog does vomit their tablet up, it’s important to speak to a vet straight away.

Behavioural changes: Some medications can cause behavioural changes in dogs; therefore, after giving your dog Piriton, you should monitor them closely for several hours to make sure they’re not acting any differently than usual.

Trouble urinating: Piriton, like many other antihistamines, can tighten the muscles that surround your dog’s urethra, making him need to strain when urinating. For several hours after your dog has ingested Piriton, keep an eye on them when they pee to see if they’re in any pain or discomfort.

Loss of appetite: Digestive upset from Piriton can also manifest itself as loss of appetite. If your dog doesn’t want to eat or eats less than he usually would, speak to your vet to find out the best course of action.

Seizures: The active ingredient in Piriton – chlorpheniramine – isn’t suitable for dogs with epilepsy or other similar health problems* (see list below). Of course, if your dog has never shown any outwards signs of epilepsy or has never been diagnosed with it, it’s impossible to know whether or not Piriton will have this adverse effect; therefore, it’s important to keep a close eye on your pup for several hours after they’ve taken Piriton.

What is the typical dose of Piriton?

In pretty much all circumstances, your vet will prescribe your dog a specific amount of Piriton, which takes into consideration their age, weight, overall health, and the severity of their condition.

In most instances, your vet will prescribe your four-legged friend a dose that equates to between 0.2mg and 0.4mg per kg of bodyweight, which will be taken every eight to twelve hours.

What are the signs of Piriton overdose in dogs?

In humans, Piriton overdose induces several primary effects; these include: rapid heartbeat/palpitations, blurred vision, nausea and/or vomiting, restlessness, and extreme drowsiness. Although we can’t say for sure that a Piriton overdose will have exactly the same symptoms in dogs, our canines friends will likely experience similar – of not the same – symptoms if they’ve consumed too much Piriton.

If you think your dog has overdosed on Piriton, contact your vet immediately.

Can I buy Piriton from a Pharmacy?

So, how safe is Piriton for dogs?

Given that Piriton has been used for over fifty years, it’s accurate to say that this antihistamine is a safe medication for dog. However, there is no medicine – be it for humans, dogs, or both – that is 100% safe in 100% of people/dogs; therefore, you must always stick to the prescribed dose (as per your vet’s instructions) and monitor your dog for several hours after they have ingested Piriton.

Regardless of the condition, illness, or ailment, there will be a natural alternative to pharmaceutical medication out there. Whether it works as well (or works at all) will often remain to be seen, but if you’re looking for a more natural approach to allergy relief for your four-legged friend, it’s certainly worth considering.

In this section, we’re going to a look at the most popular natural allergy relief products and supplements for dogs. However, it must be pointed out that you should always speak to your vet straight away if you think your dog has an allergy or allergic reaction to something, as immediate treatment may be required. If in doubt, ring your veterinary clinic without hesitation.

Never heard of Quercetin before? Don’t worry; most people haven’t! Quercetin is a flavonoid, which, in layman’s terms, is simply something that gives a vegetable or fruit its colour. But Quercetin isn’t just a colour pigment; it purportedly has anti-inflammatory, antihistamine, and antioxidant properties, which can help to reduce inflammation and itching – two of the most common symptoms of allergies in dogs.

Coconut oil is one of the most popular health and beauty products in the human world, but it can also be used on our canines friends too.

Coconut oil contains high amounts of a substance called Lauric acid, which can reduce yeast production and reduce itchiness, which may help with flea bites and skin-based allergies. Furthermore, when used with other anti-inflammatory products such as Omega-3 fish oil, it may help to suppress inflammatory responses that are a byproduct of allergies.

Aloe Vera gel is another of nature’s wonders that humans have used for a wide variety of application for many centuries. Aloe gel has anti-inflammatory, antibacterial, and antifungal properties, making it a fantastic natural choice for treating itches and burns. Although it can be bought by the bottle, it is always best to extract the gel direct from the leaf (don’t use the leaf itself, though, as this can cause a laxative effect in dogs).